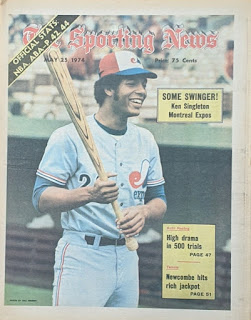 The Sporting News
May 25, 1974
Singleton, Staub Throw-In, Eclipsing Rusty by Bob Dunn p.3
MONTREAL-Ken Singleton once was genuinely out of his league playing baseball. He was five. His playmates were 12, maybe 13.

"They never really believed I was that young," he says now, smiling, "until they saw I had half a day of school, and they had a full day."

Singleton now is 26. The age difference between him and his playmates is virtually meaningless. He's beyond their league now.

When Singleton joined the Expos in the spring of 1972, he was one-third of the returns on Rusty Staub. He was one of three Mets who were going to fill three positions, every day, for the Expos. Even on his very best days, and there were many, Staub was capable of filling only one.

BUT TODAY, were the Mets able to offer Singleton a return ticket to Shea stadium, the price would have to be Rusty Staub-plus.

Singleton has served his apprenticeship in becoming a certified major leaguer and, to him, it seems like only a natural progression of events.

"I always thought I had the ability," he said. "And we had three teams in New York that were all very good, always, so I guess you get very interested in the sort of thing while growing up.'

At four, Singleton had his first glove. At six, he switched the glove from his right hand to his left, because all his playmates threw right-handed. About the same age, he started hitting from the right side instead of the left, for much the same reason.

TODAY, HE IS a switch hitter who makes contact equally well from either side. He still can throw left-handed, but for professional purposes he sticks to being right-handed.

"But I still shoot baskets left-handed, and I write left-handed," he said, adding "but when I throw with my left arm, it bothers my shoulder... I feel things tearing."
Singleton doesn't remember much about New York City, and that was another part of his preparation for baseball. He remembers he lived in at 1830 Lexington Avenue and he remembers the phone number, because they were drilled into him in case he ever got lost. But the only baseball he played in the city was the disorganized kind because that's all there was.
......